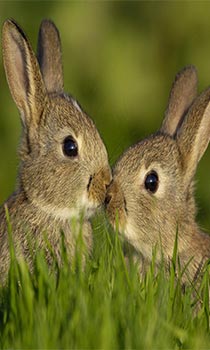 Did you survive the hot, fiery month of February? On March 6th, we shift into the month of Yin Fire Rabbit 丁卯.

In Chinese Metaphysics, Yin Fire 丁 is often compared to a candle. While a candle is in no comparison to the size of our Sun (Yang Fire 丙), do not under estimate its power! In actuality, Yin Fire 丁is more dangerous because of its unreliable and unpredictable nature. Looking at a simple candle, you notice it flickers and moves in all directions, elegantly flowing in no particular pattern.

What will it do next? Will it rage into a fiery blaze and overwhelm you with its heat and power? Or will it comfort you with warmth and grace? Don’t get fooled by the “Yin” nature of the elements because March is still a strong fire month with Fire burning on top of Wood. A tiny flame can easily turn into a huge bon fire, forest fire, and an explosion, and is also often associated with gun fighting as it relates to bullets and ammunition.

With all the head spinning riots and controversial social, economic, and political issues in countries like Ukraine, Thailand, and Venezuela, to name a few, the world will continue to witness the horrors of these violent protests and gun fighting going into March. And history has shown a pattern…

Five years ago (or 60 months prior), March 2009 showed similar behaviors with very little relief. For instance, gunmen attacked a bus carrying the Sri Lankan cricket team near the Pakistani city of Lahore, killing six police escorts and a driver. Then, a teenage gunman killed 15 people on a rampage at a school in southwest Germany, including nine students and three teachers. Both situations are evidence of a strong and unstable Yin Fire 丁 activity.

Note: Did you know the 9/11 terrorist attack in the US also happened on a Yin Fire 丁 Day and Yin Fire 丁 Month?

We will not see any relief until the end of March when the Earth Dragon 辰 element shows up in April, finally giving way for this heat to weaken and settle down.

Fret not! The presence of the Fire element still brings us some hope. As previously reported in February’s forecast, Fire in the Five Elements system represents joy, giving rise to a sense of optimism. And we will need it!

Momentum from February’s blazing fire will continue to stimulate investor confidence and drive positive economic and stock market upturn. In 2009 Yin Fire Rabbit 丁卯 month, the Dow Jones Industrial Average saw its biggest gain with 379 points, and the S&P 500 rose over 6%. Therefore, we can logically deduce that the financial markets will do well.

Elementally, the Rabbit 卯 is a Yin Wood 乙 element, and is the 4th in the 12-year cycle of the Chinese Zodiac (after the Tiger 寅). Aside from the “normal” combine relationship with the Dog 戌 and clash against the Rooster 酉, the Rabbit 卯 also creates a “Two Penalty” with the Rat 子.

What does this mean? The penalty is often dramatically described as an “uncivilized penalty,” referring to a person who is disloyal or goes against something that they should be loyal or grateful to, usually in relationships. For those “meeting” the Rabbit 卯 this month, the penalty will create some discomfort in your relationship area. It is best to control your emotions and/or desires before reacting negatively or impulsively. Take a deep breath, collect your thoughts, and evaluate your circumstances and choices before you. This month will teach you to learn a few new nuggets about yourself and put things in perspective – things are not always as bad as you make them out to be.

People born on day of Rabbit 卯 are typically more gentle and mild temperament, keeping up with its Yin nature. However, Yin Fire on top makes a Rabbit person very friendly and sociable. Besides, the Rabbit is also a Peach Blossom (or Flower of Romance) Star to those born in the Year or Day of Tiger 寅, Horse 午, and Dog 戌. This is a great month to get out and explore new social settings, promote your efforts, and come out from hibernation. It’s time to stimulate the mind and body.

In the matters of the health, Fire represents the heart and blood circulation. Take notice of any inflammations in the body, including any feelings of stress and anxiety. Incorporate cooling energy of the Water Element, such as fish, omega-3 supplements, salads, and fruits, and other techniques that support the kidneys. The Water Element will also strengthen the Wood Element, which directly impacts the liver, spine, head, and limbs.

Feng Shui Flying Star 7 is in the Center this month. It is best to place 6 metal coins in the South corner of the house and avoid Star 5 in the East. If the East side of your space cannot be avoided, then it is best to hang a 6-rod metal wind chime to dissolve this Misfortune Star. Look out for Stars 2 and 5 in the East, indicative of conflicts in Eastern Europe and Ukraine, and with military invasions also coming from the East. Isn’t Flying Stars fascinating?