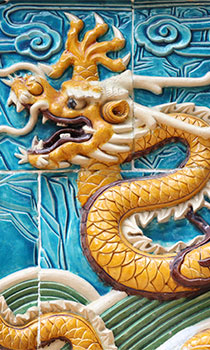 On April 5th, you can expect to notice a HUGE shift as we enter into the strong, heavy month of Yang Earth Dragon 戊辰. You can equate this month like the grandiose image of a mountain.

This April can finally be the positive release to those who have been struggling with the Hot Hot Fire energy of the last two months, and it might have even felt a lot like a balloon that’s been filled up with air and no outlet. In many ways, April will feel a lot like an exhale. Now, it’s time to release, time to breathe it out…

For some, the weighty Earth month can feel like a heavy load – pressure, tension, and discomfort. This is the ideal time to get yourself grounded and rooted in love and self compassion. After all, the Emotion for the Earth Element is related to Meditation.

This is the beauty of understanding your personal BaZi. It is exactly for this reason – in times of ups or downs – you can consciously align your thoughts, behaviors, actions, and attitude to what is happening. It gives you perspective on why things are or are not happening to you and around you. While it is important to listen to your body and your intuition, it is still up to you to navigate how you want to flow in and out of nature’s cycle.

In Chinese Metaphysics, Yang Earth 戊 is just like a mountain – big, grand, heavy, immovable, and absolutely impressive. Geologically speaking, mountains are formed from the earth’s tectonic plates crashing together. This tremendous power – or energies –force the land to jut upwards with the sides of the plates crumple in an explosive collision. This colossal force is Mother Nature working at her optimal best.

When we take stock of what’s happening in the world today – the tension, aggression, and fierce fighting – is a result of the shift of the Horse 午 Year (and subsequent strong Fire months). That’s why the Earth Element is a welcoming change. Finally, a reprieve.

For instance, President Vladimir Putin’s BaZi Self Element is Extremely Weak Yang Fire 丙. He does NOT like Fire. While his popularity among Russians is at its peak, his behavior and judgment, on the other hand, have been erratic and aggressive especially in the last couple of months. Will April (his favorable Intelligence Element) give him the support he finally needs to cool his head and work towards a peaceful discussion? Yes, it is very possible and it is likely that he will achieve great success. In fact, as we approach the Dragon 辰 month, and at this writing on March 28th (also a Yang Earth 戊 Day) Putin was on the phone with President Obama to discuss Ukraine for a diplomatic resolution. And this is a positive sign.

As for Mother Nature and in the Five Elements cycle, Yang Earth 戊 is a clash to the year’s Yang Wood 甲 energy, plus the Fire Year contributes to the strength of the Earth Element. Therefore, we can expect to see some earthly unrest such as earthquakes and landslides. One example from five years ago (or 60 months prior), on April 6, 2009, an earthquake of 6.3 magnitude struck central Italy, killing more than 200 people and injuring another 1,000. The town of L’Aquilla is the epicenter of the earthquake, but as many as 26 towns nearby were affected.

Moving to the energy of the Dragon 辰. Elementally, the Dragon 辰 is also a Yang Earth 戊 Element, and is the 5th in the 12-year cycle of the Chinese Zodiac (after the Rabbit 卯). It is a unique and special Element in comparison to the other 11. The Dragon 辰 does not stand for any of the normal symbolic stars. For instance, it is never a Nobleman, Peach Blossom, or Academic Star. When the Dragon 辰 meets the Dog 戌, it not only creates a Clash relationship, but it also forms a partnership dramatically referred to as “The Gate of Heaven and Hell.” People born with these animals side-by-side generally develop strong intuitive or psychic powers, and is often found in people who are athletes and martial artists, including the late Bruce Lee. It is also a symbolic representation for spiritual growth and profound transformation. On the other hand, because there is no Nobleman at the hour of the Dragon, when disasters do occur, they are generally catastrophic.

Note: Did you know the terrorist attack on 911 and the 2008 Asian Tsunami both occurred during the Dragon Hour?

The Dragon 辰 is one of four (of the 12 animals) that can create a “Self Penalty” energy. For those who have a Dragon in their Four Pillars/BaZi charts, it is an important time to take stock on some valuable life lessons this month. Understanding what emotions, circumstances, or people you encounter will be the catalyst for growth and self discoveries. Only that sometimes, these discoveries can conjure up feelings of discomfort and unease.

In the matters of the health, Earth represents the stomach, spleen, muscles, digestive system, and cells. Fertility and pregnancy (uterus and ovaries) are also related to the Earth Element, which supports life through the placenta, a correspondence of the Spleen energy. An imbalance could manifest in insulin resistance and adult-onset diabetes mellitus, including weight gain.

Feng Shui Flying Star 6 is in the Center this month. It is best to place 6 metal coins in the North of the house and avoid Star 5 in the Southeast. If the Southeast side of your space cannot be avoided, then it is best to hang a 6-rod metal wind chime to dissolve this Misfortune Star. Stars 6 and 4 are both in the Center, further contributing to the “heavy pressure” energy expected this month. This combo can also contribute to viral flus such as the chicken flu because 6 is related to breathing organs and 4 is Rooster. Also watch out for fire-related disasters to the Northeast where Stars 9 and 7 are residing.