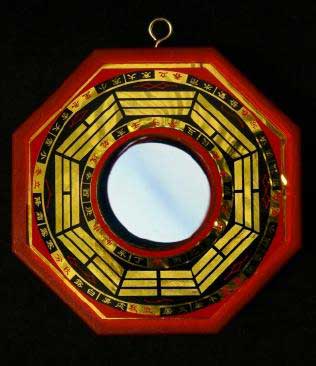 Contrary to popular belief, a Chinese Bagua Mirror is not traditionally used to “cure” or dissolve negative energy. While a Bagua Mirror is commonly found in many Chinese emporiums and shops, this item is more of a cultural trinket than it is related to Feng Shui in practice. Allow me to explain…

First, Ba means “Eight” and Gua means “Trigram”. As such, a Bagua Mirror consists of Eight Trigrams encircling a reflective mirror, which is located in the center.

The Trigrams are arranged in a way to show the cosmic state in static order. In other words, it reflects “utopia” or the state of the universe before there was any interference by humans, other living creatures, or the force of nature. As such, this arrangement shows the universal condition when only the “virgin” or pure force of nature exists and it exists in total harmony.

In Chinese history, legendary Fu Xi (~4500 B.C.) is credited as having to be responsible for establishing this arrangement, which is more commonly referred to now as “The Early Heaven Ba Gua Arrangement.”

Because The Early Heaven Ba Gua Arrangement reflects life as we wish it to be – harmony for all of eternity – this arrangement is believed to offer protection against evil spirit, negative energy, or unpleasant sightings. Therefore, you may even find this protective arrangement appearing as the first ring around the needle of a Luo Pan (a Feng Shui Compass).

In traditional Feng Shui, mirrors ATTRACT Qi, not deflect (a common myth). Therefore, a Bagua Mirror attracts unwanted Qi into the center of the device and traps it with the protective arrangement of the Trigrams. That’s why a Bagua Mirror is rarely used indoors. It is more common to see it placed outside to address extenuating circumstances in which a property may be in close proximity to a graveyard, a hospital, or unpleasant physical sightings called “Sha Qi.”

But change is the only inevitable guarantee in life. The ever-changing and cyclical evolution of the four seasons exist and manifest all around us – in our environment, in our homes, and in our bodies. Utopia may be what we all hope for, but it is not the state of reality. Therefore, around 1000 B.C., King Wen is said to have rearranged Fu Xi’s Trigrams to reflect this truth.

That’s why this new arrangement – The Later Heaven Ba Gua Arrangement – reflects the cycle of the four seasons. It accounts for the movements of the Chinese Five Elements over time and the subsequent and continuous evolution of cosmic reality. Because this arrangement, which incorporates the factor of time, depicts a more realistic and dynamic view of life, it is widely adopted in many classical Feng Shui formulas to reflect the ever-changing influence of energy over time.

Copyright © | Feng Shui by Jen LLC | All Rights Reserved | Materials may not be copied, translated, or distributed without prior written consent.