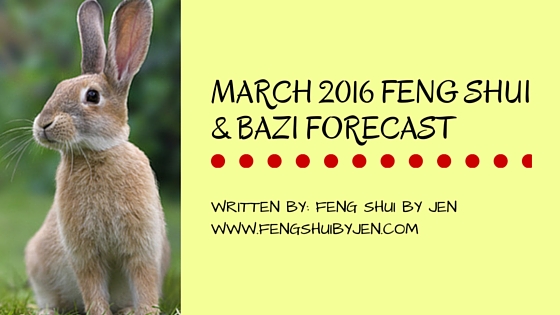 Did you welcome the Monkey 申 Year with a big bang? For some people, February stirred up a lot of “interesting” and compelling shifts. Now that we are inching closer to the Rabbit 卯 month, we may begin to feel some reprieve from the universal clash between the Tiger 寅 (February) month and the Monkey 申 Year.

From March 5th to April 4th, the Elements is Yin Metal Rabbit 辛卯.

Yin Metal 辛 is the Heavenly Stems 天干 and this is often compared to beautiful treasures such as precious metal, gems from the earth, or diamonds in a rough. For Yin Metal 辛 people, they are considered beautiful, elegant, exquisite, and often have a deeper appreciation for the finer things in life. Similar to their Yang Metal 庚 counterpart, however, they also value loyalty, devotion, and authenticity. While they thrive on shining and being in the spotlight, they often need a lot of reassurance, validation, support, and recognition. When irritated, Yin Metal 辛 people can be quite harsh like a dagger, moody, over-sensitive, unforgiving, and cold.

This month, Yin Metal 辛 on top will combine with Yang Fire 丙 in the Year, but the Metal 金 on top will cut the Wood 木 below, bringing superficial harmony with underlying tension and conflict. Don’t jump the gun too prematurely with talks of peace and resolution. More on this later.

Rabbit 卯 is the second Earthly Branch 地支 in the celestial animal order of the Chinese Calendar. It also represents the peak or the height of Spring. That’s why the Rabbit 卯 is considered the strongest Wood木 Element in the season. So even though Metal 金 on top is sitting in a destructive 剋 relationship, the strength of the Rabbit 卯 in the season is still very powerful.

Similar to last month’s forecast, the Elements show up in a destructive cycle 剋 with Metal 金 conquering Wood 木, like an axe cutting a piece of wood. Although they are essentially in a “fighting” position, the influence of the Elements may not be as harsh as it was in February.

Sixty months ago, or five years to be exact, which was also a Yin Metal Rabbit 辛卯 month, we bore witness to a chain of events that forever shook the world: 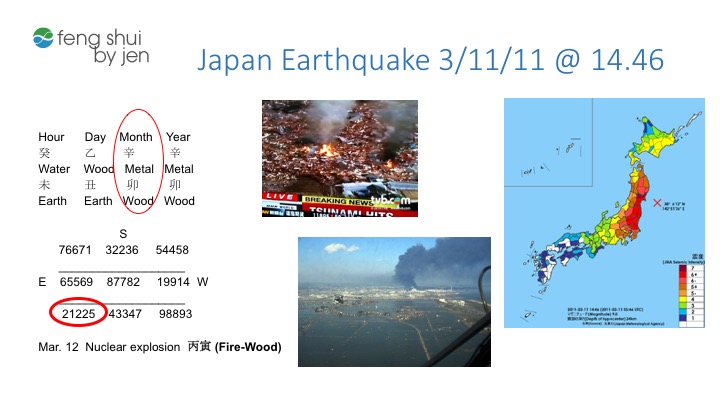 Note: Did you know this was neither the largest nor the deadliest disaster to strike this century? That record goes to the 2004 Banda Aceh earthquake and tsunami in Sumatra, a magnitude-9.1 which killed more than 230,000 people. That year was also Monkey 申 year!

Although the Elements caused turbulence and hardship, it also brought temporary resolution to many ongoing conflicts; thus, birthing some exciting new energies as well, albeit short-lived. For example, sixty years ago, 1956, also a Yang Fire Monkey 丙申 Year, Morocco and Tunisia both declared its independence from France, and Pakistan also became the first Islamic Republic.

That same year, the energy of the Spring season gave strength to the Fire 火 in the year, promoting feelings of optimism and confidence, especially around the economy. For instance, in the U.S., the Dow Jones closed above 500 for the first time, rising 2.40 points to 500.24. This was listed as one of the closing milestones of the Dow Jones Industrial Average. And the Bull Market posted impressive growths in the booming economy following the Second World War. Not bad!

And so, the prediction this month will include the following: 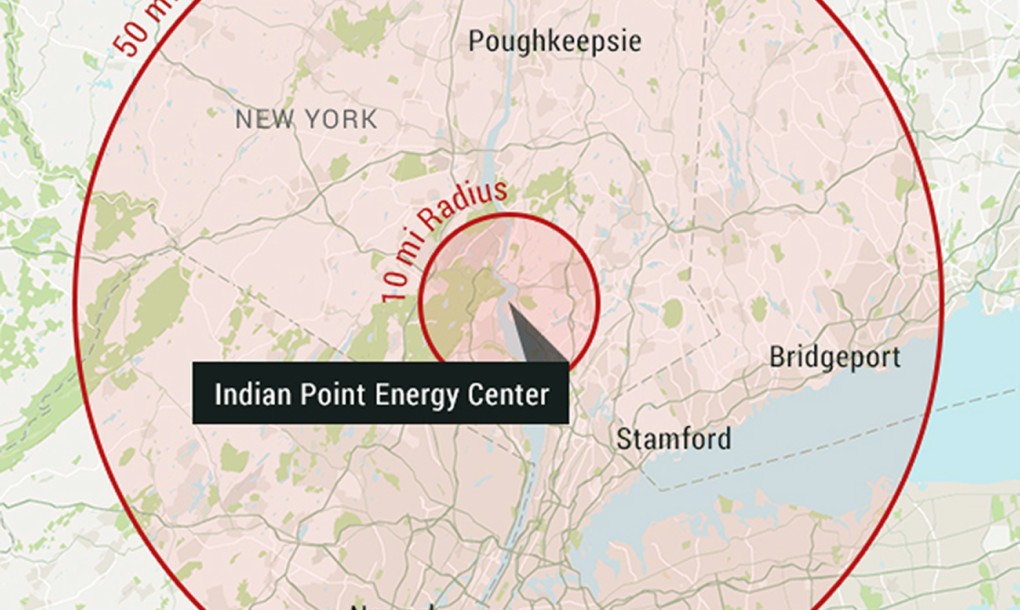 Because life is a dynamic phenomenon, you can surely expect the energetic qualities of your home and office to also change over time. That’s the fundamental principle of Flying Star Feng Shui玄空風水.

To simplify an otherwise very complicated practice of Flying Star Feng Shui 玄空風水, just take note that the good stars (or positive energies) are denoted by numbers 8, 9, and 1. The rest – 2, 3, 4, 5, 6, 7 – are negative or outdated energies, with 5 and 2 symbolizing the worst of all the stars.

This month, the Ruling Star is “1” because it takes the center palace. You can see the Flying Star chart for the month below. 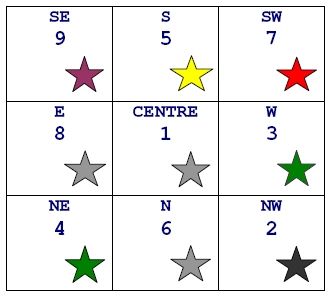 Here, the recommendations for remedies are general comments only and it is important to notate that the impact of the monthly energies will depend on the inherent natal chart (or base chart) of your space.

You may click on the links above to learn more about the cures.

Even though the East will be prosperous with the Monthly Visiting Star 8 also connecting with the Annual Star 9, be careful how you place your enhancements because you may not be able to activate 8 if the base chart of your space is not positive. For example, the Flying Star chart of your home has an outdated star like 6 or 7. Because both 6 and 7 are Metal 金 Elements and 8 is an Earth 土 Element, 8 will only enhance a negative star (Earth gives birth to Metal).

Hence, be careful with your enhancements to activate the positive Monthly Stars in the East (8), Southeast (9), and Center (1). That’s why randomly placing objects may worsen, rather than improve, the Feng Shui 風水 of your home or office. Please consult with a professional to obtain the proper Flying Star chart for your home before making any enhancements.

You may click on the links below to learn more about the meanings of the symbolic stars.

Even though the height of the Spring season urges us to focus on the liver and gallbladder as well to the kidneys and adrenals (because of the lack of Water 水 Element), I am bringing up the thyroid gland this season.

The thyroid controls the body’s metabolism from how fast you burn calories to how fast your heart beats, and it also regulates how your body synthesizes protein intakes and other hormones. Because the thyroid is interconnected to more than one Element, maintaining a healthy thyroid ensures that the body’s Elements as it relates to Water 水, Wood 木, Fire 火, and Earth 土 are in check. Otherwise, everything is affected!

Traditional Chinese Medicine (TCM) regards thyroid diseases such as hyperthyroidism (over-active thyroid) and hypothyroidism (under-active thyroid) as a Yin/Yang imbalance. In Chinese terms, when Yin is deficient it cannot regulate the Yang energy from escaping outward and upward, and this “reckless” movement of Yang brings about the characteristic symptoms of Hyperthyroidism. Therefore, you may exhibit signs of Fire/Wood/Water/Earth imbalances such as heat, agitation, anxiety, irritability, insomnia, increased sweating, muscle weakness, and weight loss. Hyperthyroidism raises your risk for osteoporosis, a condition that causes weak bones that break easily (Metal 金).

On the other hand, when the Yang is deficient, it simply cannot produce the vital energy necessary to keep the body functioning well, and symptoms of Hypothyroidism result. Therefore, you may exhibit signs of Water/Wood/Fire/Earth imbalances such as cold hands and feet, weight gain, depression, swelling, and fatigue.

External factors such as diet, weather/the season, and physical injury and internal factors such as emotional stress, mental stimulation, and hereditary conditions, can all affect the bioelectrical movement in the body and cause an imbalance of electrons at a cellular level. If left untreated, chronic thyroid imbalance can result in certain autoimmune diseases such as Hashimoto, Graves’ disease, diabetes, and arthritis.

Feng Shui 風水 is not about locating the “love corner” or the “wealth corner” in your home. This approach is singular and does not take into account the two most important and dynamic variables, which is time and directional energies. Hence, Flying Star Feng Shui 玄空風水 is by far the best and most superior approach to understanding and explaining the changing energetic qualities of your space at any given moment.

With this approach, the “energy” or the Elements are calculated based on a systematic, methodical, and objective way. The Classical Feng Shui 風水 approach understands that time, just like in BaZi 八字, are always attached to the Five Elements as they move in a cyclical pattern. Therefore, we are able to clearly articulate and forecast how certain events will manifest at any given time.

In March 1956, also a Yang Fire Monkey 丙申 Year and Yin Metal Rabbit 辛卯 Month – exactly the same as it is this month – Elvis Presley released his first gold album titled Elvis Presley, becoming the first rock-and-roll album to top the Billboard chart, a position it held for 10 weeks.

Copyrighted © 2016 | Feng Shui by Jen LLC | All Rights Reserved | Materials may not be copied, translated, or distributed without prior written consent.