In this upcoming presidential inauguration, Americans will welcome a new First Lady: Slovene-born Melania Trump. Melania, a former model, will assume the role of First Lady on January 20, 2017, and she will be the second foreign-born First Lady of the United States, followed by Louisa Adams in 1825.

Melania was born April 26, 1970 in former Yugoslavia to a modest family. She was born on a Yang Fire 丙 day. Many people born on a Yang Fire 丙 day exhibit characteristics that is often compared to the sun: they are bright, energetic, warm-hearted, optimistic, and generally have a “sunny” disposition. They are also selfless, great care-givers, trust worthy, and reliable. Just like the sun, they crave routine and often have a forward-moving outlook on life. Due to their tendency to have an overly positive attitude, this sometimes can harm them because it denies them the ability to proactively confront problems, especially when they are unpleasant, negative, or difficult. And so this makes them, at times, a bit naive and unrealistic.

Moreover, Yang Fire 丙 people use their feelings a lot and their emotional heart can often cloud their rational mind. Therefore, they sometimes behave rashly/spontaneously or speak quickly without careful thinking. This quality, however, can be “balanced” depending on how ones chart looks. If a Fire person has a lot of Wood Elements (Resources), then the person can be described as conservative, thoughtful, and moderate. On the other hand, if a Fire person has too many Earth Elements (Intelligence), then a person can be seen as aggressive, ambitious, and outspoken.

Melania’s chart shows 2 very strong Earth Elements in the Year (Dog 戌) and Month (Dragon 辰). These Elements represent her Intelligence, showing that she is actually quite smart, intellectual, and well-spoken. Did you know Melania speaks six languages? She speaks Serbo-Croatian, English, French, Italian, German, and her native Slovene.

Note: I myself am a big fan of many Yang Fire丙 people in my life! 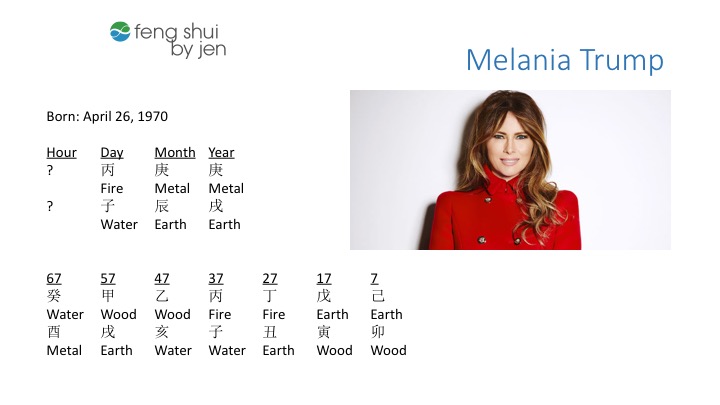 Although she often accompanied her husband during his presidential campaign trail, Melania herself has kept a low profile, rarely giving interviews or doing too many public appearances and speeches. Perhaps this will change when the 2017 Rooster 酉 Year arrives and she can tap into the energy of her Peach Blossom and Nobleman to expose a more sociable and reachable side of her life and new role as the First Lady of the United States!

The two Yang Metal 庚 Heavenly Stems 天干 sitting in her Year and Month is her Money Element. Therefore, people’s first impression of her is about money and glamour. Fortunately, the Earthly Branch 地支 underneath shows her Intelligence Element supports Money; meaning, she herself has the skills to generate her own wealth.

For fun, let’s trace her life and learn how her Luck Pillars have influenced her life up to this point:

Aged 7-16: this was Melania’s 10-year Peach Blossom Luck (Rabbit 卯). During this time in her life, she started modeling and was subsequently signed with a modeling agency. Yin Earth 己 on the Heavenly Stems 天干 represents her aggressive intelligence, compelling her to start working at a very young age. Because this is an “output” element, it shows that perhaps her studies were disrupted; instead, she was already catapulted into the work force having to show off her skills and talents very early on. It is also no surprise to see that her chosen field is one related to beauty and fashion, aligned with the Peach Blossom energy!

Aged 17-27: this was Melania’s 10-year Traveling Luck (Tiger 寅). She experienced a lot of changes in her life at this time, including dropping out of university, and modeling and traveling to places like Milan and Paris. The Traveling energy compelled her to move around a lot, which often showed signs for big shifts and transitions. This included her 1996 (age 26) relocation to New York City, where she would later meet—and marry—the future President Trump!

Aged 27-37: this was Melania’s 10-year Nobleman Luck (Ox 丑). At this juncture, her whole life changed when she married Donald Trump in 2005, which also happened to fall in her Ox 丑 Nobleman Year (married on January 22, 2005). This duplicate Nobleman luck brought good fortune and auspicious energy. Did you know her husband’s fierce opponent, Hillary Clinton, was also in attendance at their wedding?

The following year, Melania gave birth to her only son, Barron, born in 2006 Tiger 寅 Year. This Tiger寅 Year was the year of big changes, and being a first-time mother is definitely a big change!

What’s to come for this next luck at age 47? This coming April, Melania will celebrate her 47th birthday and she will shift into a new Luck — her 10-year Nobleman Luck (Pig 亥)! In 2019, also the Year of the Pig亥, will duplicate with her luck, indicating a huge turn of events in her life. It can be the highest of highs and the lowest of lows. I suppose we will just have to wait and see.

Nonetheless, 2017 will be a fun way to reel in the Rooster Year 酉 since I’d like to call it the “honeymoon” year,  and it will mark both her Nobleman and Peach Blossom Year! In this case, we hope her good fortune can extend to her husband as well!

Note: BaZi Talk™ articles on Feng Shui by Jen™, like this one, are for educational purposes only. As readers, please kindly refrain from leaving any political comments (especially anything negative and derogatory) so as to keep the forum strictly for Feng Shui enthusiasts to learn more about every day BaZi. Thank you for your consideration!

BaZi Service: If you’d like to get your personalized BaZi reading, please click HERE to place your online request.

Copyrighted © 2016-2017 | Feng Shui by Jen™ | All Rights Reserved | Materials may not be copied, translated, or distributed without prior written consent.