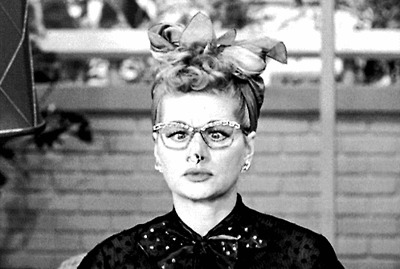 August 6, 2017 would have been Lucille Ball’s 106th birthday! The original Queen of Comedy was my childhood idol. Every school night after finishing my homework, I would turn on the Nickelodeon channel to catch an I Love Lucy episode. I thought she was the funniest lady on TV and I admired her sense of style and humor.

Over the years, I took it upon myself to learn more about the life of the lady who helped revolutionize American TV network for generations to come.

Did you know the famous redhead’s good looks (who was actually a natural blonde) were deemed “not as charming” in comparison to the other Golden starlets like Katherine Hepburn, Elizabeth Taylor, Rita Hayworth, Lauren Bacall, Lana Turner, Betty Grable, and Susan Hayward? This Yang Earth 戊  lady did not let that sentiment discourage her one bit. She managed to push her way to the top by literally charming the audience not necessarily with the standard good looks, but with her skills: slapstick comedy and versatile vaudeville acts. 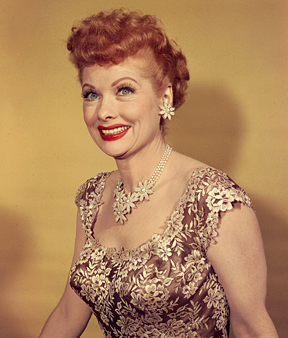 Lucille was a woman way ahead of her time. She was a genius on- and off- the camera. While the general public recognizes her mostly for her comedic performance on screen, she was also quite the savvy, business-minded woman behind the scenes.

For instance, before Oprah Winfrey started Harpo Productions, Lucille Ball was the mastermind behind the filming scenes, including becoming the first ever woman to run a major television studio, Desilu. Her production company produced many hit shows like Mission: Impossible and Star Trek. 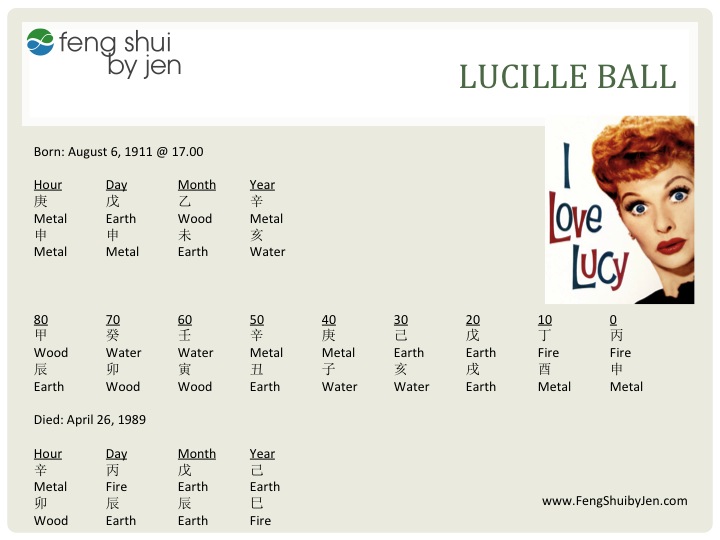 Lucille was born as an Extremely Weak Earth person, she follows Intelligence = Metal. Therefore, her favorable Elements are: Metal, Water.

Her BaZi chart is Extremely Weak because: (a) she has no Resources Element (Fire), (b) the Goat 未 month is exhausted by so much Metal, and (c) it half combines with the Pig 亥 to create Wood. Also, most of her successes were achieved when the Fire Element was absent. Therefore, her chart is “Follow the Intelligence” kind.

Her Four Pillars has 2 Academic Stars (Monkey 申) and a lot of Intelligence Element – making her a clever, creative, an innovative person. Yin Metal 辛 in the Year Pillar is also her Aggressive Intelligence (Killing Boss/Killing Husband); therefore, her chart is suitable for a person to be both a performer and a boss.

When she was young, she was in the luck of Metal (aged 0-10). The Intelligence Element shows up, proving she already had to start working at such a tender age to help support her family, which is consistent with Lucille’s own account in her 2008 autobiography, Love, Lucy.

Although she had made many films in her 20s during Earth luck, none made her a commercial success because Earth is unfavorable to her. Her big break finally came at the age of 40 during the Metal-Water Luck, both her favorable elements (Intelligence and Money). This was also her 10-year Peach Blossom luck, the same year I Love Lucy debuted on TV in 1951… and the world came to love and adore Lucy Ricardo.

The actress died on April 26, 1989 due to an aortic rupture on a day of so much Earth. Also, her death was in the early morning hours around the Rabbit 卯 hour, which also formed a string of Wood (Pig 亥 + Rabbit 卯 + Goat 未) with her Year, Month, and Luck (at aged 70). The string of strong Wood (conquering her), Dragon Penalty, too much Earth, and Fire Year (Snake 巳) were all unfavorable to her at the time of her death, making this a very devastating time.

She surely will be missed, but thank goodness for re-runs!

Here are some of my all-time favorite Lucille Ball quotes:

“Love yourself first and everything else falls into line.”

“It’s a helluva start, being able to recognize what makes you happy.”

Copyright © 2017 | Feng Shui by Jen LLC | All Rights Reserved | Materials may not be copied, translated, or distributed without prior written consent.