Mark Zuckerberg is the legendary young billionaire (worth $73 billion USD as of 2018), programming prodigy, and technology entrepreneur best known for co-founding and leading Facebook. 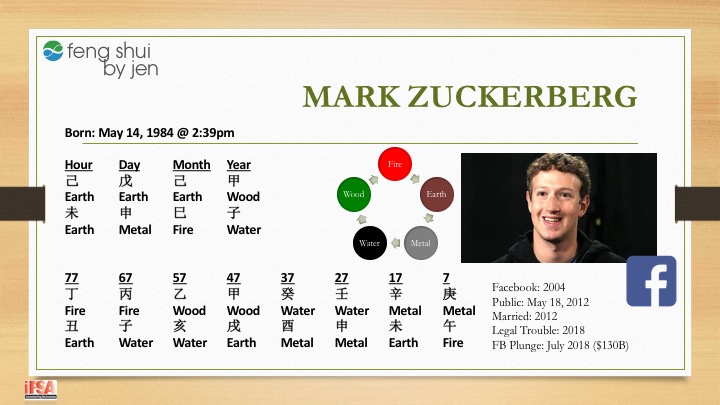 Mark’s destiny is outstanding. He was born with two Academic Stars (Monkey 申 and Snake 巳), the make-up of an entrepreneur (Money and Intelligence), and a Nobleman Star (Goat 未). In a way, we can say his Four Pillars is a lot like a fancy car—the formulation of a good destiny. But the timing of good fortune must also be taken into consideration to assess whether his destiny will allow him to utilize his in-born gifts and achieve great success.

When looking at his Luck Pillars, he started his first independent luck at age 7. This was strong Fire luck, not so favorable. Because Fire represents his Resources Element, it means he had a chance to stay focused and be studious. This was an important time for him to propagate his vision and nurture his creative juices. In fact, during his formative years in high school, he was already busy taking advanced collegiate courses and perfecting his computer programming skills. At the same time, he was also very productive and completing many video game projects because the Metal Element on top is his Intelligence Element. This indicated that he was already going to work to earn a living and show off his skills and knowledge. Metal in the Heavenly Stem is his favorable element.

Next, his college years were under the luck of the Goat 未, his 10-year Nobleman. Even though this Earth luck is technically not so favorable, he actually did what we would typically recommend to people with similar luck: don’t go against destiny, use what you have.

Indeed, he used the Earth Element to his favor by creating a technology platform (Earth) to bring friends/communities (Earth) together, the primitive stages of what is now known as Facebook. All of this is in alignment with the Earth Element.

Despite the Nobleman luck, the Earth Element—unfavorable element—is still troublesome. For one, he encountered a lot of obstacles before Facebook officially launched, including being accused of using student photos without their consent, bombarding one of Harvard’s network switches and being forced to shut down, and creating enemies. Three individuals accused Mark of misleading them into believing he would help them build a social network, while he was instead using their ideas to build a competing product. This led to a legal suit and subsequent settlement. That’s why the Earth Element still posed a threat.

Nevertheless, the Nobleman luck was his saving grace, allowing him to overcome and rise above these challenges. Yin Metal 辛 Heavenly Stem represents his Aggressive Intelligence Element, which ensured that he was able to eventually carry out his vision and catapulted him to pioneering a new and innovative wave in technology.

The next 20 years (aged 27-47) shows the luck of Metal and Water Elements, both his best elements. That’s why the prediction is that Facebook—and his other endeavors—will only continue to grow and prosper. He is unstoppable!

In 2004, at the very end of the Goat 未 Year—his double Nobleman—he launched Facebook from his Harvard dormitory room.

Without missing a beat, the next day, on May 19, 2012, Mark married his long-term girlfriend, Priscilla Chan.

In 2018, Mark faced congressional inquiries in light of the Cambridge Analytical scandal and revelations about the platform’s role in the dissemination of Russian disinformation during the 2016 presidential campaign. Mark appeared before Congress on April 10, 2018 at 2:15pm and April 11, 2018 at 10am.

*Goat = Mark’s Nobleman hour. The Day is also Water and Metal, both his favorable elements. Piece of cake!

*Rooster = Mark’s Peach Blossom Day, which is also a Water and Metal Day, both his favorable elements. No problem!

But alas! Facebook is expected to still see profits in the next fiscal year once Facebook corrects many of its self-inflicted pains especially around data privacy and security. This is quite in alignment with Mark’s BaZi as well. Once we shift into August (Monkey month / Metal season), and we progress closer to the Water Years (2019, 2020), no doubt Facebook will regain its footing once more!

Conclusion: 2018 Earth Dog 戊戌 Year (heavy Earth Year) may be unfavorable to Mark, which is a year that he can encounter new enemies and competitors. The pressure from the public and government is also aggravated by the influence of the season (Wood = Spring; Fire = Summer). However, this hardship will subside once we shift into the second half of the year (Metal = Autumn; Water = Winter). Couple that with the support of his good luck (aged 27-37) of Water and Metal, and this trouble is short-lived. Mark is Superman!

Want to learn more about your own chart? Fill out the form below to schedule your private consultation!