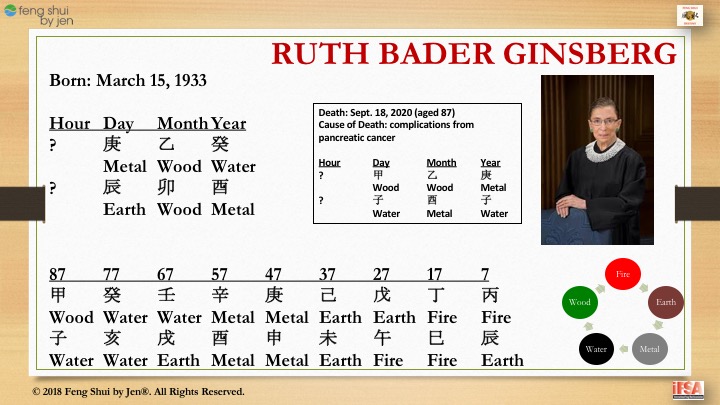 Justice Ruth Bader Ginsburg (RBG) was born on a Yang Metal 庚 day, and she definitely possessed the qualities that come along with that. Typical qualities of a Yang Metal person are:

RBG’s BaZi is also referred to as a “Fai Kong” chart because she was born on a Yang Metal Dragon 庚辰 day.

Fai Kong people are often described as “unbreakable” because they can rise above the most challenging and bleakest of circumstances—and win! They are also incredibly stubborn, strong-minded, and unwilling (or incapable) of accepting defeat. RBG is well-known for sticking to her guns to break barrios for women and working moms. This unbreakable quality makes them exceptionally brilliant because they can prevail over anyone or any hardships. RBG once said that she attended law school “for personal, selfish reasons. I thought I could do a lawyer’s job better than any other. I have no talent in the arts, but I do write fairly well and analyze problems clearly.”

In fact, thoughts of limits and constrictions or even the possibility of defeat and failure rarely ever cross the minds of Fai Kong people. They persevere and always find a way to triumph. Altogether, Fai Kong people have strong personalities that may be too powerful or too strong for others. Sometimes, this makes them difficult to work with. Did RBG ruffle some feathers over the years? Definitely. Imagine having to argue your case against her! Good luck with that J

Thankfully, Yang Metal Day Master tends to be more just and fair in their position, so they have the emotional and social intelligence to understand various points of view. But they are not known for their gullibility or humility. That’s why they tend to take fairly hard and fast rules on things they believe to be true, accurate, or just. This came through during her time on the supreme court, when she went to battle for gender discrimination and other areas of inequality.

Fai Kong people are unapologetic and proud. They know they are the best and exude confidence that they can meet any obstacles with a winning and determined attitude. Fiercely loyal and fair, you’ll be glad to have them on your side!

Appearance wise, some famous Fai Kong women may look soft and feminine on the exterior (actresses Jessica Chastain, Kathryn Winnick, Ali Larter, Emma Watson, Jenna Duwan, Soarise Ronan, Diane Krueger, Lauren Bacall, Margot Robbie), but don’t let the façade fool you. Just because they portray a sweet and gentle lady, they are not as fragile or sensitive on the inside. To some, the Fai Kong trait can also make them seem intimidating and aggressive. Look at RBG. She was no more than a mere 5’1 in height but she was formidable!

RBG was also born with an Aggressive Intelligence Element (Yin Water 癸). She was smart, articulate, presentable, spirited, and well-spoken. The newly nominated Judge Amy Coney Barrett also has Aggressive Intelligence Element in her Four Pillars. Without a doubt, many such pioneers do often have this Element inside their Four Pillars because this is what makes them more extraordinary.

RBG was also born with an Academic Star (the Rabbit 卯 sign – also her Nobleman) and a Peach Blossom (Rooster 酉). These in-born gifts add to the “bells and whistles” in BaZi, making her chart configuration even more exceptional.

RBG was born in the spring. Therefore, her favorable Elements are: Earth, Metal, and Fire (50/50). When looking at her luck pillars, we see they are fairly stable because they are composed of primarily her good Elements.

RBG received her Supreme Court Justice nomination in 1993 (age 60) during the luck of Yin Metal Rooster 辛酉, her Peach Blossom luck. This is similar to Judge Barrett getting nominated in 2020, also her Peach Blossom year. Because Peach Blossom is the energy for love, romance, and fame, it is a useful star for job promotion or garnering admiration. Therefore, when the Peach Blossom star shows up and is favorable to the chart, this is when a person enters into a new relationship—romance or friendship—or becomes famous and well-known.

RBG battled cancer in the last twenty-or-so years. Her first of five diagnoses came in 1999 (age 66). Because RBG is weak Yang Metal, the Dragon 辰 sign in her Day Pillar is the second powerful Earth Element (after the Goat 未 sign); however, this Dragon has no support from the Fire Element. What’s more, it “combines” with the Rabbit sign to formulate half of the spring (Wood) season. Therefore, the Earth Element is out of balance and too weak to support the Metal. This means trouble when it comes to health.

In Chinese medicine, the Earth Element is often referencing our cells, muscles, stomach, pancreas, immunity, and overall vitality. Imbalance of the Earth Element (too much or too little) can trigger cancer disease or tumor growths, including muscle spasms, diabetes, and autoimmune diseases.

Nearly a decade later, in 2009, before she transitioned into the new luck cycle of Yin Water Pig 癸亥, RBG underwent surgery for pancreatic cancer. During these next two decades, her health took a beating because this was also twenty years of Water Element, her unfavorable Element. All the Water energy is weakening her Metal and straining the Earth Element even more. Therefore, it is not unusual to understand why she was prone to an Earth-related disease for much of the last two decades.

On Nov. 8, 2018, RBG fell in her office, fracturing three ribs, for which she was hospitalized. The BaZi chart of the accident was both her clash and “Three Shas.” Three Sha days are inauspicious because they can cause accidents, misfortune, and serious illness. But in true Fai Kong style, RBG survived and overcame another challenge and continued to work.

RBG died on Sept. 18, 2020 from complications of pancreatic cancer. She died six months after she shifted into the new luck of Yang Wood Rat (aged 87). This luck posed a very powerful Water cycle not only because the Rat is Yang Water, but the Rat sign is also a half-combine to the Dragon sign, creating more powerful Water. Never forget, Water is her #1 unfavorable Element.

Couple that with a Rat year, a Rooster month (powerful Metal strengthening the Water sign), and a Rat day, it was simply too much Water energy for even a strong Fai Kong person to bear.

RBG, who was Jewish, died on the eve of Rosh Hashana, the Jewish new year. Fittingly, it is a day when Jews look backward and forward, reflecting on what has passed, and preparing for what is to come.

As the world slowly transition to Period 9 in Year 2024 (the year of women and spirit), RBG’s distinguished career and pioneering work for gender equality will cement the lives of future generations. She co-founded the Women’s Rights Project at the ACLU in 1972, “Women’s rights are an essential part of the overall human rights agenda, trained on the equal dignity and ability to live in freedom all people should enjoy.”

RBG, the pioneer, the trailblazer, the fair justice, will be remembered for many generations to come. While her death marked the end of her long battle on behalf of equality for all Americans, others must now carry that fight forward.

Copyright © | Feng Shui by Jen LLC | All Rights Reserved | Materials may not be copied, translated, or distributed without prior written consent.